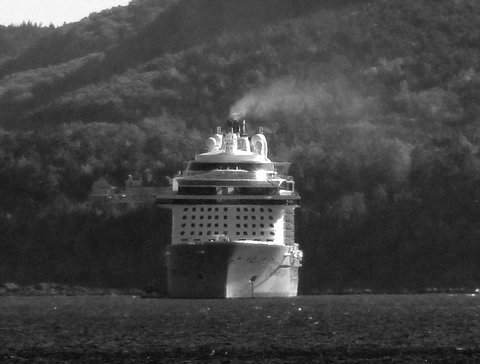 Do the voters of Bar Harbor want a cruise ship berthing facility for large cruise ships at the old Ferry Terminal property adjacent to their downtown?

There are a number of environmental factors that need to be investigated regarding the terminal berthing for cruise ships.  One in particular is air pollution.  How do sulfur dioxide and other toxic chemicals emitted from burning diesel adversely impact residents of the town of Bar Harbor?  How are visiting tourists to Bar Harbor and Acadia National Park affected by the noxious fumes?  Here are some researched and documented answers.

■  Eighteen wheelers, dump trucks, and buses—including most school buses—emit 15 parts per million (ppm) of sulfur dioxide into the atmosphere while idling;1 whereas, cruise ships release 1000 ppm of sulfur dioxide at idle that is 66 times more sulfur dioxide than what those diesel vehicles emit.

■  The Environmental Protection Agency (EPA) recommends laws that restrict the idling of large diesel trucks and buses to no more than 5 minutes because of the Group 1 carcinogenic rating that diesel has when it is burned.2  All of California as well as many cities and towns across the United States now have put this law into effect.2

■ Bar Harbor code # 194-38,3 which was enacted on 17 June 1997, states that no motor vehicle is allowed to idle more than 5 minutes anywhere downtown.  This code not only includes diesel vehicles but also cleaner gasoline-powered vehicles also.

The electrical demands of cruise ships is also critical to understanding how they contribute to air pollution.  When a large cruise ship is tied up to a dock, or berthed, the ship needs to generate 13 megawatts (MW) of electricity4 for thousands of people for its 10-hour visit.4  Used only seasonally, this tremendous amount of power is too demanding to plug into the town’s electrical grid, it simply is not feasible.  It costs $10 million per berth to install the electrical infrastructure required.  A ship’s electricity is used for lights, internal power systems, and the desalination of ocean water to produce over 150,000 gallons per day of fresh water.  For an average ship holding 3,000 people, this figure amounts to over 1 million gallons per week.5

To produce their electrical needs, two large cruise ships berthed at the ferry terminal for their 10-hour visit will use 640 gallons (320 each) per hour and will emit 66 times the sulfur fumes that road vehicles emit per hour.  The sulfur dioxide emissions from two ships are the same as the sulfur dioxide emissions from 42,624 large trucks and buses at idle (mathematically, 640 X 66 = 42,624) for 10 hours.   This violates Bar Harbor’s adopted downtown code to an astronomical amount.  The smoke from two berthed, large cruise ships has as much sulfur dioxide as the smoke from 42,624 large diesel vehicles idling at the ferry terminal for 10 hours —not for 5 minutes but for 10 hours!

Further, according to the Michigan Department of Licensing and Regulatory Affairs, Diesel Exhaust Gases says : “The toxic chemicals of most concern in diesel exhaust are the oxides of nitrogen (nitric oxide, nitrogen dioxide), sulfur dioxide, aldehydes, primarily formaldehyde, acetaldehyde and acrolein, and various hydrocarbons particles. . . . Prolonged exposure to diesel exhaust can increase the risk of cardiovascular, cardiopulmonary, and respiratory diseases, including lung cancer.  In June 2012, the International Agency for Cancer Research (IARC) classified diesel exhaust, including diesel particulate matter, as a known human carcinogen (Group 1).”6

“Sulphur dioxide (SO2) is irritating to the eyes, throat, and respiratory tract.  Short-term overexposure causes inflammation and irritation, resulting in burning of the eyes, coughing, difficulty in breathing, and a feeling of chest tightness.  Asthmatic individuals are especially sensitive to SO2 and may respond to concentrations as low as 0.2-0.5 [parts per million] ppm.  Prolonged or repeated exposure to low concentrations (1-5 ppm) may be dangerous for persons with pre-existing heart and lung diseases.  Health effects are documented at various concentrations by different researchers and organizations.  A sampling of  health effects that sulfur dioxide fumes have on mucous membranes in healthy individuals are outlined in the following list.”7

■ 1-5 ppm:  Threshold for respiratory response in healthy individuals on exercise or deep breathing

■ 150 ppm:  Maximum concentration that can be withstood for a few minutes by healthy individuals

When molecules of sulfur dioxide (SO2) are inhaled, they turn into sulfuric acid (H2SO4), which is battery acid.  When nitrogen dioxide (NO2) is inhaled, it turns into nitric acid (HNO3), which is the nasty component in acid rain and smog.

If large cruise ships are berthed at the proposed 121 Eden Street terminal site, there will be times when the diesel exhaust from these berthed cruise ships will be blown on a west, northwest wind across the land into downtown Bar Harbor as a fumigating plume.  Sometimes the exhaust will travel on an easterly sea breeze right at Paradise Hill, which would be level with the smokestacks a quarter mile away and continue into Hulls Cove and then into Acadia National Park and beyond.  The health effects from the fumes of these cruise ships can be measured 200 miles inland from shipping areas.

Ports around the world show high rates of lung cancer and heart disease.  In Europe, 60,000 deaths from diesel are attributed to ships burning diesel and 12,000 of them are from sulfur dioxide inhalation.8

After reading this documented research, come to your own thoughtful and rational conclusions.

2. IARC Monographs on the Evaluation of Carcinogenic Risks to Humans: “Diesel and Gasoline Engine Exhausts and Some Nitroarenes.”  https://www.iarc.fr/en/media-centre/iarcnews/2012/mono105-info.php  International Agency for Research on Cancer,  vol 105, Lyon, France: 12 May 2012.

A.  Five-minute limitation. No person may cause or allow a motor vehicle to idle for more than five consecutive minutes while that vehicle is parked in any of the downtown areas during the time from May 1 to Columbus Day.

B.  Exceptions. The limitation set forth in the preceding subsection shall not apply to:

(1) Fire trucks, police cars, ambulances and other emergency vehicles while responding to an emergency call.

(2) Utility vehicles, including contractor’s equipment, while engaged in the construction, maintenance or repair of utility facilities.

(3) Motor vehicles idling while in a traffic lane, as the result of congested traffic conditions beyond the driver’s control (traffic jams).