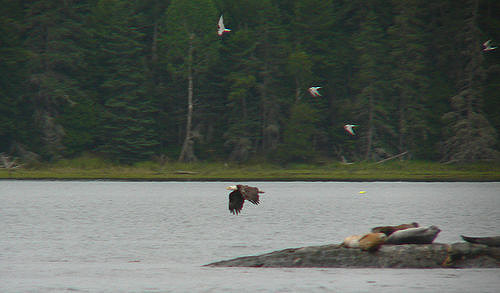 Thousands of years ago, the Native peoples of this area loved this Bay, traveling here in summer by sea or by rivers, to fish, harvest sea bird eggs, dig clams, trade with other tribes. Archaeological digs show this habitation from Gouldsboro to Blue Hill, and shell middens exist on many islands. How can we now, hundreds of years later, sit back, as we face the ultimate industrialization of this sacred place? Frankly, the colonization of nature continues.  All over the world, beautiful natural places are valued only for the money that can be extracted, and  pollution of our air and water destroys our home. No thought is given to the next seven generations, or even to the health of the next generation.  Please see below to a link about the history of the original residents:

In the last several weeks, multiple articles have appeared regarding the efforts to save Frenchman Bay from over development. LD #1400, Port Authority bill. continues it’s progress through the Legislature, despite the Ferry Terminal Advisory Committee’s recommendation to use the ferry terminal site as a public multi-use marina.   The Emergency status was removed from the bill, but basically it remains the same as it was. A link to the bill is at the very bottom of this blog post, (before the removal of the emergency language). Please read especially about the ports, piers, industrial parks, and warehouses.

The story of the Transportation Committee is an interesting one. Members of FFB traveled to Augusta on Tuesday January 16th (see previous blog post) and witnessed what seemed like a divided committee vote.The public hearing had been held in the spring. However, after voting, the Transportation Committee reconvened on Thursday 1/18/18, and then again on Friday 1/19/18, and  re-voted (which was apparently open all weekend to those Senators missing). The vote closed at the end of the day on Monday 1/22/18, and was unanimous (not all Senators voted), in favor of passing the bill. None of these later meetings or votes were listed on line, and no notifications were sent out to the interested parties, as had occurred with the first  Tuesday 1/16/18 vote. We learned one of them occurred at 7pm. We assume these extra meetings were posted 24 hours ahead of time, on some obscure bulletin board at the Capital, the minimum required by law.

On January 26th, the following article appeared in the Bangor Daily News:

A rally and citizen action occurred in Augusta on 2/6/18, the day the Senate was finally supposed to take up the bill- see below to that link of the rally, which included the 33 foot scroll, which includes 2500 of the now 3500 names of those who have signed the change.org petition against LD #1400.

And (on 2/6/18), the BH Town Council voted to reject an offer to settle a lawsuit (the Ruger suit) related to the zoning and pier plan, if the town council agreed to build a marina at the site- BHTC called it “black mail”.

To give you some idea of the mind set of some Senators: a Senator voting to pass the bill on 2/8/18 said that the bill only says that a pier MAY be built, not WILL be built, and therefore Darron Collin’s words held no meaning for him in his vote. Even though we have FOAA proof that this bill is the brain child of the cruise industry and consultants.

Other false logic being stated by the proponents include: “Bar Harbor voted for it in June 2017” (an online cruise industry article posted hours after the June 2017 zoning vote, now makes much more sense- they were planting the false sense that the people of Bar Harbor en-mass knew that  defeating citizen’s initiative, article #13, and voting for article #12, really meant they were voting for a Port Authority and a Mega Cruise ship pier). Another false choice is that the only way Bar Harbor, a town with a valuation of $1.5 billion, can afford the build a marina, is via a Port Authority.

Below are the amendments that were added when the bill was passed out of the Transportation Committee, when they re-opened their vote out of the lime light:

Amend the bill by striking out all of the emergency preamble (page 1, lines 1 to 9 in L.D.).

Amend the bill by striking out all of section 5 and inserting the following:

‘Sec. 5. Referendum; effective date. This Act takes effect when approved only for the purpose of permitting its submission to the legal voters of the Town of Bar Harbor at an election called for that purpose and held within 2 years after the effective date of this Act. The election must be called, advertised and conducted according to the law relating to municipal elections. The registrar shall make a complete list of all the eligible voters of the Town of Bar Harbor as described in this Act. The list prepared by the registrar governs the eligibility of a voter. For the purpose of registration of voters, the registrar of voters must be in session the next regular workday preceding the election. The subject matter of this Act is reduced to the following question:

“Shall ‘An Act To Create the Bar Harbor Port Authority,’ as passed by the Second Regular Session of the 128th Legislature, be accepted?”

The voters shall indicate by a cross or check mark against the word “Yes” or “No” their opinion of the same.

The result of the election must be declared by the municipal officers of the Town of Bar Harbor and due certificate filed by the town clerk with the Secretary of State.’

This amendment strikes the emergency preamble and emergency clause from the bill and makes technical changes.