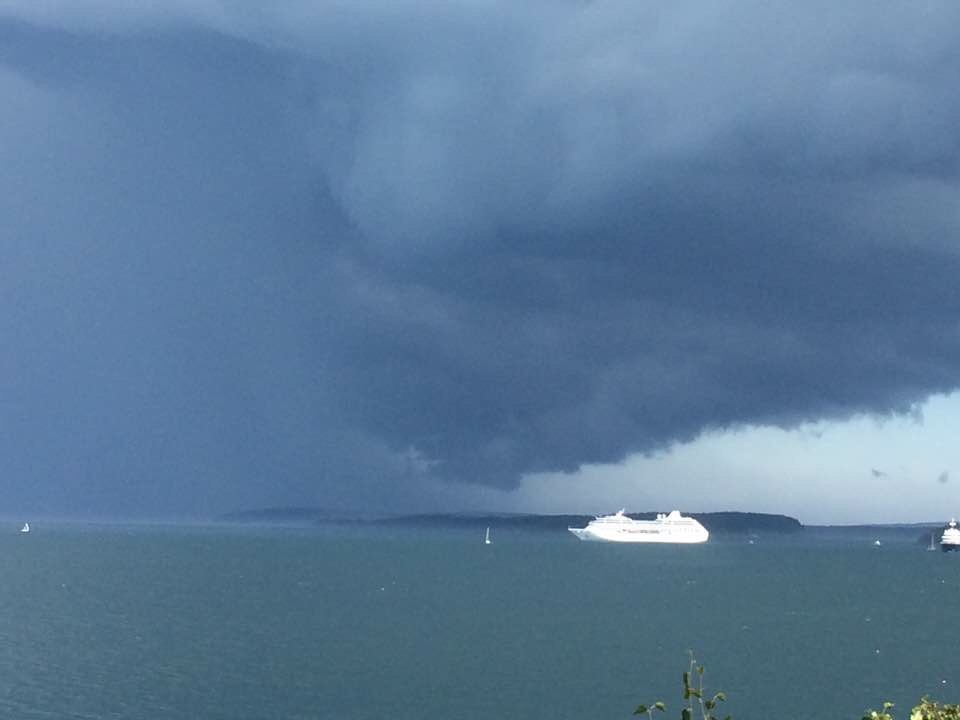 The Frenchman Bay Area is not unique in the issues we are facing. Might it be gas lighting to tell us, who do not live in the town where a berthing pier is proposed, but live within a few miles across a bay, that increased industrialization and large cruise ship visitation does not affect us? We breath the same air. We use the same waters. Frenchman Bay is even mentioned in this international report, with a picture no less, on page 29.

Above is a link to a document generated from an International Symposium called “Harboring Tourism, Cruise Ships in Historic Port Communities” Held in Charleston, South Carolina in 2013, hosted by The World Monuments Fund (WMF), the Preservation Society
of Charleston, and the National Trust for Historic Preservation, in cooperation with the International
Council on Monuments and Sites (ICOMOS), the Center for Responsible Travel
(CREST), and the Coastal Conservation League.

“While some cases demonstrated well-managed cruise tourism destinations,
there were an alarming number of cases illustrating the negative impact of cruise tourism on
port communities, especially smaller historic cities and towns that are challenged by the influx of
visitors arriving by ship. Large city ports, such as New York and Los Angeles, have the capacity
to absorb thousands of passengers headed to shore. The few smaller city success stories shared a
common theme of community collaboration in setting guidelines for cruise ships entering their
ports to ensure a return to the local economy, protect natural and cultural resources, and mitigate
social and environmental impacts. However, most of the cases presented during the symposium
echoed a common theme of costs outweighing benefits due to poor coordination and management
of the cruise tourism-port community relationship. This is compounded by the fact that,
more often than not, negotiations regarding cruise terminal development and ship dockings are
undertaken by port authorities at state, regional, or national levels, rather than by the municipalities
directly affected. The international trade and security issues associated with port management
understandably require higher government engagement, but failure to include communitylevel
stakeholders often results in the exploitation of local resources and values.”

“A constant thread throughout the symposium was that positive change requires collective
action, and the burden of that collective action falls on local communities. Concerned residents,
lawmakers, business owners, and advocates must define a future vision for their community and
establish the parameters of change and development. With that in mind, the following recommendations
emerged from the symposium with regard to negotiating the relationship between
historic port cities and potential cruise tourism:

Within Communities
• Engage all stakeholders
• Work together to establish a common base and enhance political leverage
• Examine a range of tools for collective action to enhance transparency on the part of local/
state government and port authorities (legal action, lobbying, etc.)
• Define goals for quality of life and sustainability
• Undertake community-based surveys, polls, and assessments to establish a robust
understanding of local opinion and values
• Collect data on the metrics that influence community life and health (traffic, air and water
quality, property values, etc.)
• Analyze options within the context of broader land use and transportation/mobility
planning, waterfront industry, economic development, and tourism strategies in general
• Establish limits of acceptable change and baselines for impact assessments
• Establish a formal coalition of stakeholder entities and organizations (government,
business, civic, etc.) to allow for cooperation, shared decision-making, and effective
management of cruise tourism (e.g. DMO—destination management organization)
• Develop plans for social, cultural, environmental, and financial strategies as they relate to
tourism and necessary infrastructure. In the case of heritage that means good conservation
management plans for sites that define capacities, manage visitation, etc.
• Implement a range of local policy tools to regulate and create incentives/disincentives for
complying with local standards and requirements, and also ensure a return on local investment
and social costs (laws, taxation, certifications, performance bonds, monitoring, etc.)
• Establish a system for regular long-term evaluation and communication
Between Communities
• Establish a network of organizations across historic port communities to share experiences
and information
• Undertake research to understand common challenges and best practices in a range of
historic ports
• Develop shared parameters to serve as “minimum” requirements for managing cruise
tourism
• Develop vehicles for collaborative negotiating that prevent communities from being pitted
against each other
• Form cooperative alliances for lobbying higher levels of government and the industry
Between Communities and Industry
• Work with NGOs and other international organizations to develop methodologies for
working with communities and policies for minimizing impacts in port selection and
development
• Establish community affairs officers/destination liaisons within cruise companies to allow
for direct communication with community representatives” 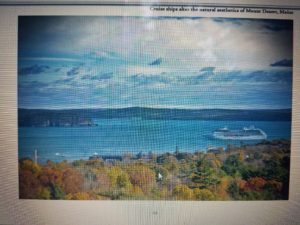 “Such changes are part of the Tourism Areas Life Cycle Model, which evaluates a site’s evolution
through a series of developmental stages that starts with exploration and ends with deterioration.
This end stage is reached when tourism’s negative impacts exceed its positive effects
and is often associated with uncontrolled mass tourism (Diedrich, 2010). Within this framework,
processes of change function in a cyclical relationship rather than a linear one, where economic
changes facilitate socio-cultural modifications and vice versa. While tourism’s economic
potential cannot, and should not, be ignored, the loss of economic self-determination caused by
over-dependence upon tourist revenue influences the loss of socio-cultural value systems and
traditions. Cultures can undergo processes of Disneyfication, in which cultural traditions are
transformed into traditions of tourism and become mimetic representations of their original
state (MacCannell, 2000). During this process, heritage is essentially “frozen” and simplified into
an amusement park-like attraction where the primary function of the community is to entertain
the tourists. “Authenticity” is usually lost and the presentation of heritage feels generally
contrived. This includes scenarios in which local communities become performers of their own
heritage, inventing or presenting highly affected displays of tradition as a response to tourist or
Per National Geographic Traveler, cruise ship tourism has had negative impacts on Mykonos, Greece
“not keeping with the natural aesthetic” in Mount Desert, Maine, and “diminishing quality of life” in Tortola, British Virgin Islands. Given the concentration of tourist activity and revenue generated within the “tourist bubble,” these port communities may be predisposed more so than other tourist areas to commodify their heritage
for tourists. Wood (2000) notes that increased interaction between visitors and local communities
furthers processes of globalization and homogenization. This process is sped up within the
host community when the ratio of visitors exceeds that of the local community, a phenomenon
that Brida (2010) and the United Nations World Tourism Organization (2010) note is especially
prevalent in the Caribbean. Such inequality threatens to undermine the role of the local
community in their own home as they compete with tourists for space and begin to feel like they
are guests in their own neighborhood.
Often called “museumification,” such processes also include situations
in which architectural styles are frozen in time and neighborhood activities are homogenized
for popular consumption. Nasser (2003) notes that though these development patterns have
become popular, they “call into question whether tourism-led development is undermining many
of the precepts that conservation is based on, particularly an overemphasis on the physical, external
aspects of heritage and conservation, at the expense of an in-depth understanding of urban
culture.” The community’s response to the pressures of tourism can thus subvert and spoil
the original attraction into a perceived falseness, which then diminishes the value of the highly
sought-after “authentic” experience. In situations where these customs and styles have been previously
lost or diminished, scholars debate whether this revival performs the service of preserving
otherwise forgotten customs or is too “inauthentic,” distanced from its original form, and interferes
with the organic development of a culture.”